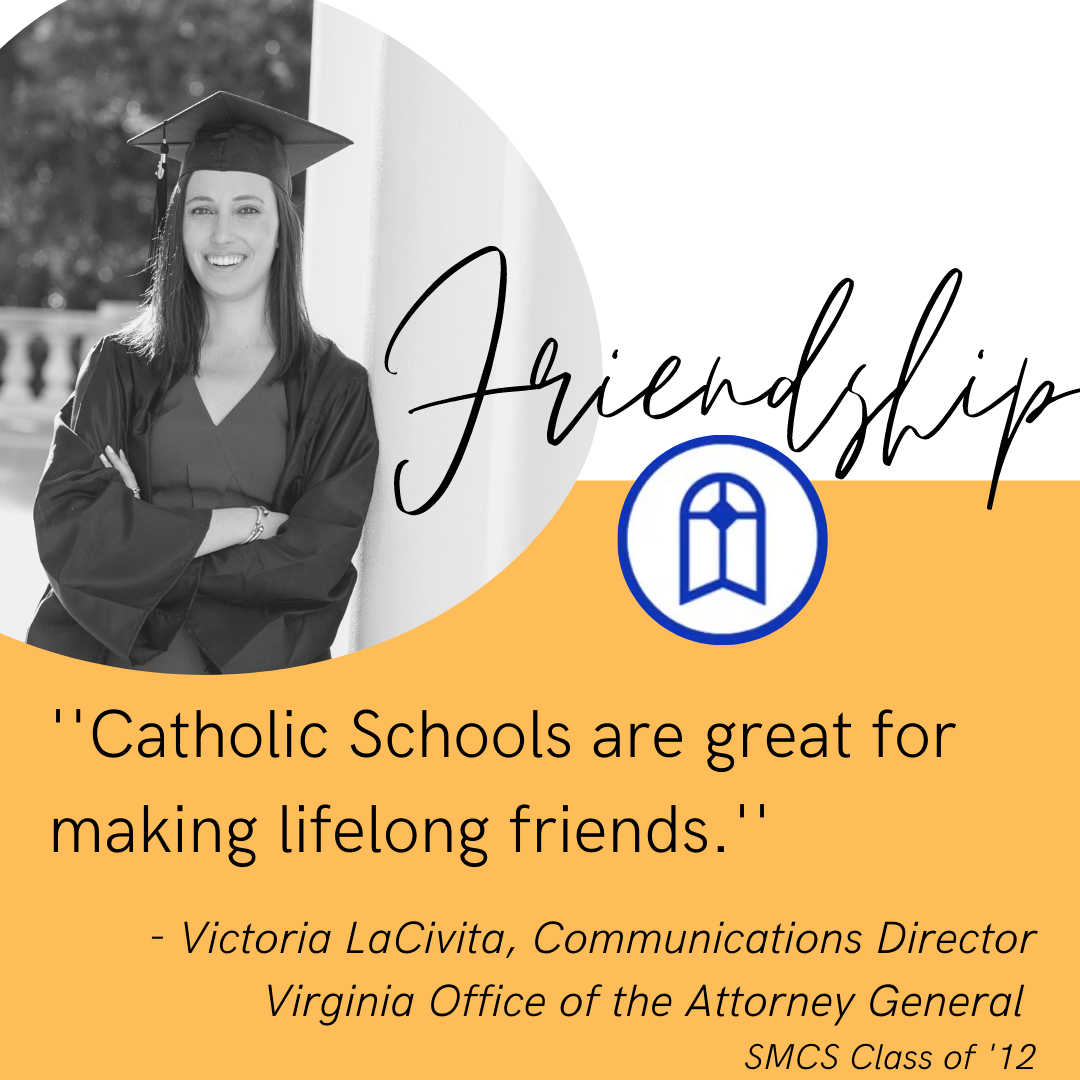 Even in elementary school at Saint Mary’s, Victoria LaCivita, SMCS class of 2012, had a feeling that she might end up in politics. History and English were always her favorite classes, and her dad works in politics, so she said it was a natural path for her to follow.

“Additionally, I’m a very competitive person, and that definitely showed during my time on the Saint Mary’s basketball team,” Victoria said. “Competition and drive are very important for working in politics.”

After Saint Mary’s, Victoria attended Saint Gertrude High School. She participated in Model General Assembly and volunteered for local political campaigns. She studied government and media at the University of Virginia and completed internships at a political consulting firm and the White House while in college.

After graduation from U.Va., she moved to Phoenix, Az., where she worked as a press assistant for Senator Martha McSally.

“Working on a political campaign is a very unique job,” Victoria said. “You work 24/7 and it all ends on one day – election day. Every day is different, and I learned an incredible amount in a short period of time. It’s a bit like drinking from a firehouse, and you can only learn from doing. I’d encourage anyone with an interest in government or politics to spend a summer working on a campaign!”

After the 2020 election, she moved back to Richmond to get involved in the Virginia campaigns. While 2021 is considered an off year for political campaigns, Virginia is one of only two states that has its statewide elections the year after a presidential election.

Victoria moved to Virginia Beach to become the Communications Director for the Republican nominee for attorney general, then Delegate Jason Miyares. In that role, she was in charge of all communications for the campaign: writing press releases and official statements and communications to the press; booking, preparing and staffing the candidate for interviews; and running the social media accounts.

“We ran a statewide campaign with only four staffers, which is unheard of in a state as large as Virginia,” Victoria said. “A lot of long days and hard work, but it was worth it.”

“Saint Mary’s IB programme really helped me learn how to think critically,” she said. “The IB programme makes you connect different ways of thought into different subjects, and while I didn’t always understand it when I was a student, it definitely helped shape the way I tackle and approach different situations.

“Additionally, the IB programme required a lot of public speaking and class presentations,” Victoria said. “When I started at Saint Mary’s, I was incredibly shy and rarely spoke in class. The IB programme, along with my teachers, played a critical role in helping me get out of my comfort zone and find confidence speaking publicly.

“Saint Gertrude was also great about making us comfortable with public speaking,” she said. “It’s pretty crazy to think that when I was 10, I was scared to read a passage aloud in English class and now I’m the spokeswoman for a statewide elected official. Saint Mary’s and the IB programme played a big role in my growth.”

“Catholic schools are great about encouraging public service, volunteer work and the general attitude of putting others before yourself,” Victoria said. “Saint Mary’s and Saint Gertrude really emphasized giving back to your community and shaped me into being someone who cares about my community and my impact on others. I’m blessed to now work in a job with a team that’s dedicated to fighting for Virginians, every day.”

Victoria keeps in touch with several of her Saint Mary’s classmates, and in fact lives within a block of three of them.

“Catholic schools are great for making lifelong friends,” she said.

She holds fond memories of Mr. Maddock’s English class and attributes her interest in communications and her confidence in her writing abilities largely to him.

She also remembers her team winning the basketball league championships twice during her time at Saint Mary’s. “I’ll never forget how the entire class – and staff – came to cheer us on,” she said.

She ended with a quip that might have been a sign of her future as an influencer: “I’d be remiss if I didn’t also mention the One Direction obsession that I spread throughout the class when we were in eighth grade.”