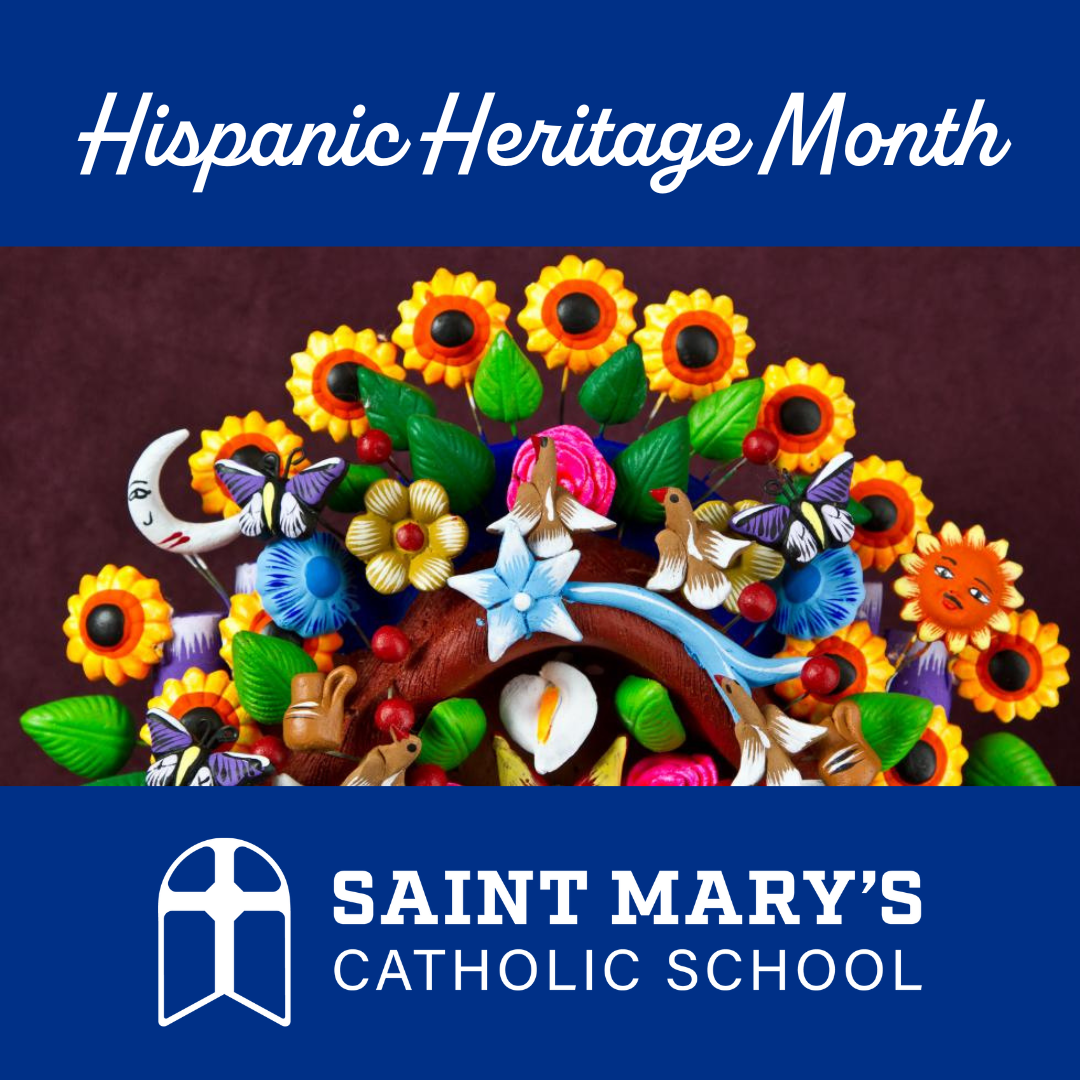 From now until October 15th, in addition to the activities outlined below, we want to add family names to the large map in our Middle School hallway to visually represent the Hispanic diaspora present in our Saint Mary’s community. Please share your family’s countries of origin here.

Monday: Staff Luncheon (Student Holiday) – We will need help from our entire community to host a themed luncheon for our faculty and staff during their Professional Development Training Day. Sign up here to volunteer your time, donate décor, prepare a traditional meal and more!

Tuesday: Bilingual Prayer Service – Mrs. Moretti will work with students to sing Spanish songs while IB Middle Years students and teachers will share readings, intentions and reflections in both Spanish and English.

Thursday: Desserts for Students – Students in Señora Bordas’ & Señora Lee’s Spanish classes will learn about traditional food this week. All students will get a chance to taste an assortment of donated snacks and treats during lunch time! Sign up here to assist.

The Segura Initiative for Children was begun by Bishop DiLorenzo in 2010. Its purpose is to increase enrollment of Latino students in Catholic schools of the Diocese of Richmond by providing tuition assistance to Hispanic families who have demonstrated financial need. In addition, this Initiative is committed to providing professional development for Catholic school communities of the Diocese to ensure that they provide innovative instructional programs that foster a comfortable, bi-lingual, Christ-centered environment for all students.

In preparation for, and during the [USCCB’s] V Encuentro process, significant demographic research was conducted and aggregated on the presence of Latinos in the Church and in U.S. society. Some of the findings include the fact that from 1990 to 2016, the U.S. Hispanic/Latino Catholic population increased by about 13.7 million, while the overall U.S. Catholic population only increased by about 3.6 million.

This demonstrates that Hispanics have been a major driving force behind the growth of the Catholic Church in the United States over the last three decades. An additional finding was that the percentage of U.S. Hispanics/Latinos who were Catholic in 2016 was 52%, and just over half of the Catholics under age 50 were Hispanic/Latino.

Each year, Americans observe National Hispanic Heritage Month from September 15 to October 15, by celebrating the histories, cultures and contributions of American citizens whose ancestors came from Spain, Mexico, the Caribbean and Central and South America.

The observation started in 1968 as Hispanic Heritage Week under President Lyndon Johnson and was expanded by President Ronald Reagan in 1988 to cover a 30-day period starting on September 15 and ending on October 15. It was enacted into law on August 17, 1988, on the approval of Public Law 100-402.

The day of September 15 is significant because it is the anniversary of independence for Latin American countries Costa Rica, El Salvador, Guatemala, Honduras and Nicaragua. In addition, Mexico and Chile celebrate their independence days on September 16 and September18, respectively. Also, Columbus Day or Día de la Raza, which is October 12, falls within this 30 day period.