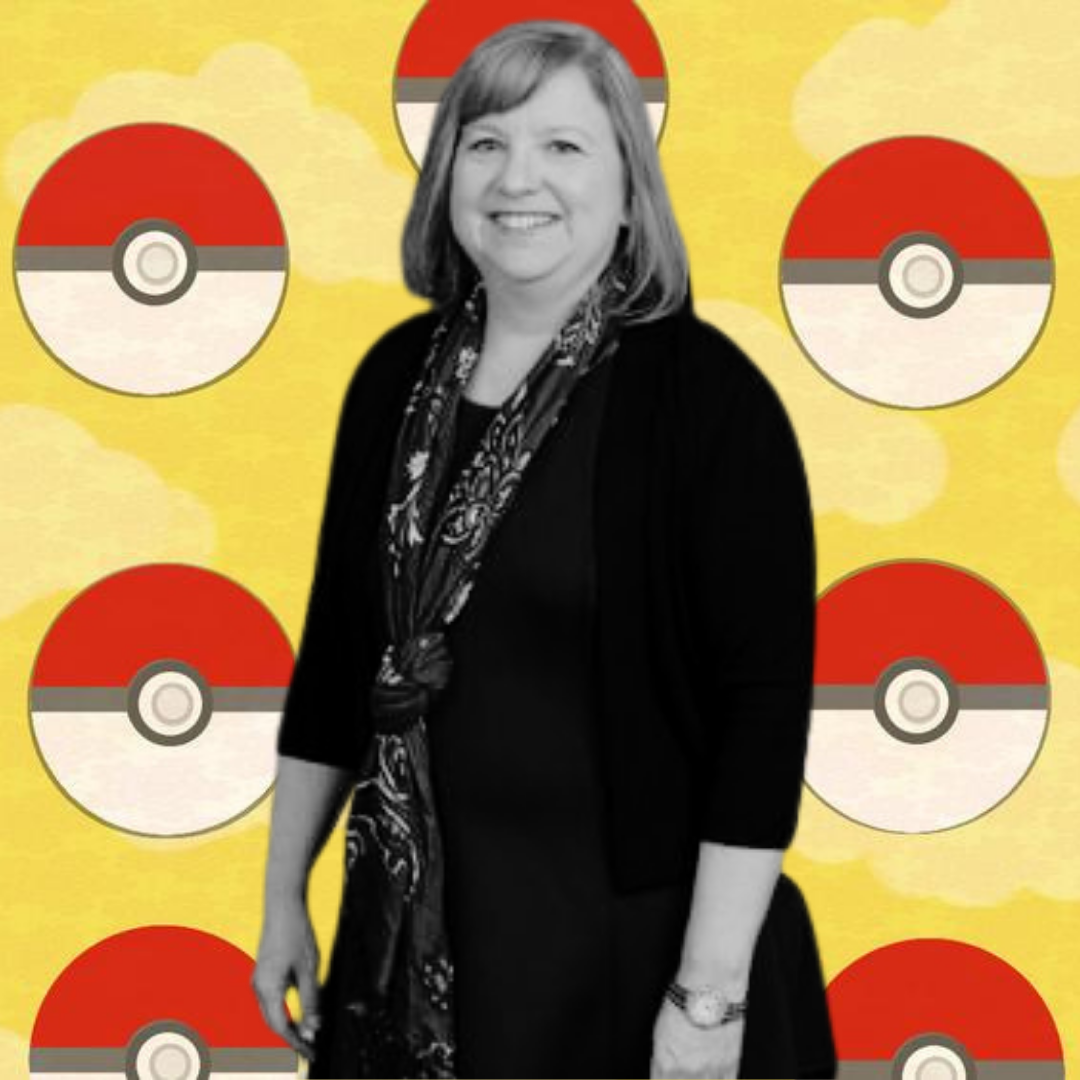 “We have met so many wonderful people around the world through Pokémon who have graciously invited us to visit them. Right now our plan is to begin [travel] in Australia and work our way back to the U.S. during several trips.“

Pam Tuskey has been teaching middle school history at Saint Mary’s for seven years, having begun in 2014. Much beloved by her students and community, she will be retiring at the end of this school year.

Originally from Pittsburgh, Tuskey came to Virginia for graduate school at UVA. While there, she met her husband, David, and has been in Virginia ever since. She began her teaching career in Chesterfield County public schools, where she taught for 12 years.

She left teaching to work at Capital One for 12 years, then returned to teaching with a year at a private school in Midlothian called Millwood.

Tuskey said she left Capital One for several reasons, the most pressing being that “I could tell that God wanted me back in the classroom. He was fairly relentless!”

She had gotten to know Dr. Tom Dertinger, then principal of Saint Mary’s, and his family, and called Dertinger one afternoon while working at Millwood to tell him that she was looking to teach in a Catholic school. He told her that that very morning the middle school history teacher had told him she was moving away and wouldn’t be returning to Saint Mary’s.

“Everything had fallen into place,” she said.

Tuskey said she’s excited about retirement and all of its possibilities, but said it won’t be easy to say goodbye.

“I will miss my amazing colleagues who have been so supportive, and these sweet kids who remind me every day of the reason I was called to teach,” Tuskey said.

Saint Mary’s has been special to her, and will remain so, she said.

“I feel Christ when I enter the building every morning,” Tuskey said. “There is a such a sense of Christian community here unlike anywhere else I’ve been.”

That sense of community is something that Tuskey has strengthened by her presence here, through her connection with students and their families.

Bethany Gasperini is a Saint Mary’s parent of five – her three oldest children, Matthew, Thomas and James, have all learned under Tuskey.

“My first experience with her was at a middle school open house night when Matthew was in sixth grade,” Gasperini said. “All of the teachers were fabulous, but Mrs. Tuskey is a social studies teacher and I am not a social studies person.

“She started talking about what the students were learning and I was captivated,” Gasperini said. “As a parent, I could see that if she had been my social studies teacher, I would have been so engaged. She’s always struck me as someone who is so gifted in the way she communicates information.

“I’ll never forget another time when she gave me some nice feedback about the boys and told me I was doing a good job,” Gasperini said. “I cherish that. She loves the kids she works with and she loves their families as well. That love shows in how she teaches and how she gives back to the community.”

Ally Talton is an alumni parent whose twins, John and Callie, graduated from Saint Mary’s in 2020. She is grateful for Tuskey’s influence on her children.

“Mrs. Tuskey is a teacher whom John and Callie cherish so much,” Talton said. “Connecting with middle schoolers can be hard to do. Her compassion and her enthusiasm paired together allow her to reach them.

I say to my kids: ‘I want the best for you but I expect the best from you,’” Talton said. “Mrs. Tuskey is that kind of teacher.

“You can tell she genuinely cares about her students – they matter to her, and likewise, she matters to them,” Talton said. “That’s a shared relationship. She’s the kind of teacher all parents hope for their children to have.”

“Not only did Mrs. Tuskey dedicate her time to teaching me about history, but she also taught me how to be the best version of myself,” said Ally’s daughter, Callie.

Matthew Faraci is an eighth grader at Saint Mary’s who’s had Tuskey as a teacher for three years.

“I really love her teaching style,” he said. “She’s very easy going – if you need to talk to her about anything she is easy to talk to and understanding. She’s also a good communicator. She presents ideas to the class well.”

What are Tuskey’s plans for retirement?

When her husband retires from teaching in a year, they plan to travel. The Tuskeys share a side job and hobby as Co-Premiere Tournament Organizers (PTOs) for Trading Card Games and Video Games for the State of Virginia. One of their primary involvements is with Pokémon competitions.

The competitions have been shut down this year because of COVID-19. Once things resume, she and David will likely be traveling to and running Pokémon events again.

They also hope to travel for fun, outside of working the events.

“We are also seriously considering moving to North or South Carolina in several years to be closer to the beach, so we will begin the exciting process of exploring possible new homes,” Tuskey said.

She also plans on doing a lot of volunteering at St. Mary’s church in whatever way she’s needed.  In the past, Tuskey has been involved at the parish as a confirmation sponsor as well as a sponsor for adults going through the Rite of Christian Initiation for Adults (RCIA). Because she converted to Catholicism herself in 1994, she feels the process is close to her heart.

She has a long list of projects to tackle around her house, too, she said.

Last but not least, Tuskey said she’d like to work on her master’s degree in theology a bit at a time, without formally entering a master’s program.

When reflecting on what’s changed since she came to Saint Mary’s in 2014, Tuskey said: “I feel like our student population is becoming more diverse, which to me is always positive, because we are reflecting the diversity of God’s beautiful creation.”

She’s also appreciated the increase in technology, such as new student Chomebooks, which has given her and her colleagues access to additional teaching tools.

As well, the renovation of the school was very exciting and needed, she said.

“I especially love our new entrance,” Tuskey said. “The statue of Mary is now in a place of prominence, and the huge windows in the front office make it feel so welcoming, as do the folks who work there.”

What words of advice would Tuskey leave for students?

“The kids have heard me say so many times: doing the right thing is rarely the easy thing, so pray for courage.“

“Be aware and be knowledgeable about current events,” she said. “Speak up if something is going on that you think is wrong. Get involved in some way, shape or form.“

“One thing this pandemic has taught me – and which Father Mike has talked so eloquently about – is gratitude – being grateful for the small things we take for granted,” Tuskey said.

This year she’s recognized how much she appreciated life before masks. “I miss seeing kids’ faces,” she said.

Tuskey wanted her students and former students to know: “If you are in need of a confirmation sponsor in a few years, please feel free to consider me. I would be honored.”

“Find your passion and listen to your inner voice, because I believe that that inner voice is God.”